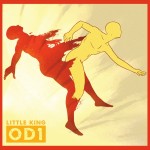 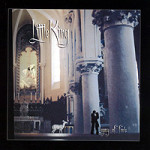 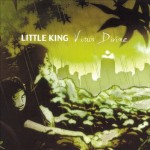 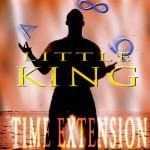 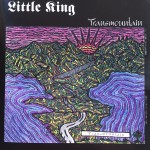 Little King was formed in November of 1996 by guitarist/singer/songwriter Ryan Rosoff in El Paso, Texas. Rosoff had cut his teeth as the guitar player in the seminal eclectic rock group Tweed Quickly (where he played with future Little King bassist Shannon Brady and touring drummer Scott Marestein.) After a year in that band, he had written enough of his own songs to try his hand at recording and producing a record.

Rosoff named the new group Little King (which is a Gaelic translation of the name “Ryan.”) Featuring bassist Mike Esparza and drummer Alex Lizarazo, the trio played a few shows locally and regionally in the next four months while preparing to enter the studio. Little King’s first “demo” CD, titled Transmountain, was released in El Paso on May 17, 1997. The group continued to tour and promote the CD, which sold quickly in and around the Southwest.

In September of ’97, Rosoff moved back to his original hometown of Seattle, Washington, with his wife and infant daughter. After composing 12 new songs, he signed a one-record deal with an independent label, Shade Records, and journeyed back to Texas in August of 1998 to record and produce a new CD called Time Extension. For this record, Rosoff was joined by former Tweed Quickly bassist Shannon Brady and drummer Jim Hargrave.

Rosoff, who has a bachelor’s degree in Creative Writing from the University of Texas-El Paso, based the concept album on the story of a fictional man’s life, and it opens with the protagonist on his deathbed in an emergency room. The dying man looks back on his life and examines all of the things he wishes he had done differently, and each song in the set relates to the questionable choices he had made throughout the years.

Time Extension sold well online and at shows as the band toured extensively throughout the western United States. Little King also traveled to San Francisco and filmed a video for the single “Smoke Spin Free.” The single received extensive college airplay, and the video was a mainstay for a few months on cable access video shows around the USA. Little King worked hard and developed a loyal following, but when Shade Records dissolved in 2000, the band agreed to go on hiatus indefinitely.

Left without a band and label, Rosoff decided to focus his energy on a new business venture, Little King Productions. The company handled print and radio promotion, management, and booking. The business grew quickly and took on a diverse roster of Rock, Hip Hop, and Jazz clients, but Rosoff continued to write songs with the knowledge that a new album would eventually demand to be born.

That itch was finally scratched in September of 2003 as Rosoff joined with drummer Wes Kahalekulu to lay down tracks for the new record, titled Virus Divine. The songs were engineered by Eddy Garcia (at the time, the touring bass player for Ministry) and were recorded at Krank Studios in El Paso. After the guitars and drums were completed, the two were joined by Brady on bass in the studio, and the tracks were completed in April of 2004.

That summer, Rosoff took the completed sessions to Toronto where the album was mixed by Terry Brown, whose impressive resume includes production credits on ten Rush albums. Virus Divine continued Rosoff’s tradition of conceptual lyric writing and follows a theme of enlightenment, inner conflict, and resolution. Based on the story of another anonymous man who is moved to change his life after watching news coverage of the  1999 school shooting tragedy at Columbine High School, Virus Divine examines the impact one righteous person can have on the world.

Virus Divine sold records through a deal with the Canadian Progressive Rock label Unicorn Records in over 40 countries. More than 250 college radio stations and a handful of commercial stations added the disc, and print and internet reviews were almost uniformly positive. Riding this wave of momentum, Little King toured the Western United States throughout 2005 at venues like Hollywood’s famous Viper Room.

Little King had arrived on a global level, and the demand for more shows and more music grew quickly.  However, when the band returned home from a month-long tour (featuring Tweed Quickly drummer Marestein as a new part of Little King) in November of ’05, another hiatus would follow.  The band members scattered and Rosoff was left to regroup.

As 2006 ran its course, Rosoff began writing more songs on his own. As nine new tunes took shape, Virus Divine engineer Eddy Garcia agreed to play drums on the record, and the two would be joined by bassist Michael Esparza, who had also played on Transmountain in 1997. Rosoff took a job as a high school English teacher, and this experience brought about a renewed lyrical focus.

The new album, Little King’s fourth effort, would be titled Legacy Of Fools. According to Rosoff, “The lyrics center on all that we have inherited and what we are willfully leaving behind.” The song “Legacy” follows four generations of Rosoff men, starting with his grandfather and ending with his son who was born in November of 2006. The track includes a beautiful violin melody performed by one of Rosoff’s high school students, Lyris Soto. “202” is named after Rosoff’s classroom number and shines a harsh light on the state of education in America. The album opener, “Prodigal Son,” examines another familial relationship, this time between the 41st and 43rd presidents of the United States. “Mea Culpa” is a heartfelt plea for forgiveness, and “Collateral Damage” is an angry indictment of the war in Iraq that asks, “What would you do if we occupied Cleveland?”

Again, Rosoff relocated his family, this time to San Jose, California.  He worked for awhile in the event entertainment business and eventually formed a corporate team building company called TeamBuilding ROI.  The business took off and consumed most of his creative energy and time, and Little King went into hibernation until late 2013.

True to form, after 6 years, Rosoff uprooted again, this time heading to Rehoboth Beach, Delaware.  Along the way, he made a stop back in El Paso and hooked up with Garcia and longtime friend and collaborator, bassist Brian Ramos.  The EP, titled OD1, was released in March of 2014. The songs include the heavy-hitting instrumental “The Leaded Beatdown,” “Happy Home” which includes a video collage of all of Rosoff’s homes since childhood, and “Black Hole” which is homage to getting after it at a Raiders game.

OD1 charted on college radio all over the United States and received airplay on over 100 stations, but touring was not in the cards as relocation and personal upheaval (chronicled on the song “Happy Home”) resulted in a creative vacuum that lasted 5 years.

The seeds were there for another album release, though, as a few songs had already been partially written back in 2014.  Living in Delaware, Rosoff met a new group of musicians and found a home on the East Coast for the first time in his life as a single dad and operating a business 2,500 miles from home.

Finally, in 2019, bassist Manny Tejeda, Rosoff’s friend from Delaware and originally from the Dominican Republic, joined Little King.  He added his unique flavor on bass and with backing vocals, and the duo traveled back to El Paso to record a new record.

Occam’s Foil was recorded again at Krank Studios in the Summer and Fall of 2019.  It features Rosoff, Tejeda, and Garcia again on drums.  As special guests on the songs “The Skin That I’m In” and “The Foil,” the band brought in David Hamilton (cello and arrangements), Christina Hernandez (violin), and Monica Gutierrez (backing vocals, and wife of Legacy of Fools keyboardist Ruben Gutierrez.)

The theme of the 5-song EP is a play on the theory “Occam’s Razor,” a problem-solving principle that states “Entities should not be multiplied without necessity,” as theorized English Franciscan friar William of Ockham. That argument for simplicity and it’s “Foil,” or counter-argument, influenced the lyrics of all the new songs.  Relationships, social norms, the opioid crisis, religion, and politics all take center-stage on Occam’s Foil.

Response to Occam’s Foil was overwhelming and affirming.  Interviews and features were plentiful, reviews were fantastic, the album charted in the Top 150 on College Radio. The song “The Skin That I’m In” generated over 120,000 plays on Spotify and was featured on Relix Magazine’s June compilation CD and playlist, and the band’s social media presence grew exponentially in just a few short months.

As the pandemic gripped the world in March of 2020, live music performance was abruptly halted.  Little King’s momentum from Occam’s Foil was in jeopardy, but with no lure of tour in the immediate future, Rosoff and Tejeda began to plot a new record.  The songs were first written on an acoustic guitar in the bedroom at Rosoff’s Delaware home, then videos of each would go to Tejeda.  Soon, the songs came together and plans for a new album drove Rosoff, Tejeda, and Rosoff’s son Asher back to El Paso to record in August of 2020.

Rosoff took the bed tracks back to his new (old) home in Tucson and began writing the words, melodies, and guitar extras. When the pandemic began to ease, the trio headed back to Eddy’s studio in El Paso in February of 2021 to complete the sessions. Joined by David Hamilton and Christina Hernandez on cello and violin, the record also introduces new contributors Asher Syrinx Rosoff (keys), Becca Gonzales (vox), and Bryan Bowles (hand biz) on the sobriety song “Set It Down.”  Jessica Flores is also featured as the lead vocalist on the 3rd song on the album, a lamentation on domestic abuse called “How Could You?”

The new record is titled Amuse De Q, and the music and lyrics were inspired by Rosoff’s time in quarantine and all of the events surrounding the global lockdown.  Lyrical topics include the joy and pain of enforced isolation, a battle with sobriety, the protests across the USA,domestic violence, and so much more.  Release date is September 3, 2021, with the first two singles and videos (“Bombs Away” and “Keyboard Soldier”) coming in June to radio and press around the world.  We can’t wait to share it with the FOLK (Friends Of Little King)!